Bellmanpark Lime Kilns were built in 1877 as part of Carter & Rowe’s limeworks. Like Hanson Cement today, they were a significant local employer.

CCS’s Bellmanpark Limekilns Project Group (BLPG) has worked closely with Hanson Management and co-ordinated a successful bid to Historic England which was confirmed in September 2018. Following a competitive tender exercise overseen by BLBG and Hanson, in February 2019 Conservation Engineers, Thomasson, were appointed by Hanson Cement, and with the assistance of the Major Grant from Historic England (HE). This to undertake urgent investigations and Repair works to the limekilns which are now on HE’s Buildings at Risk Register. The Scope of the work envisaged as set out in HE’s Grant Award is:

Rebuilding of collapsed sections of the internal kiln walls,
Removal of corroding cast iron collars at the kiln bases,
Propping of deformed brickwork in vaulting,
Repair to loose brickwork in tunnels.

Work has been progressing on the lime kiln project but at this stage it has not been of a nature for which we have been able seek assistance from your group. We have undertaken a roped access inspection of the kiln top to check for whether there was any sign of the original top surface remained – this confirmed that whatever had been there had, as expected, been removed thus meaning that all the rain that falls onto the tops percolates down through the fill and then through the masonry structure; this is the prime cause of the deterioration of the vaulting. As a consequence I have been encouraging Historic England to consider some funding for a temporary measure that will help to significantly reduce the water ingress. After discussing various options with them I have proposed a paved top laid to a fall into a channel/gutter so that we can control where the water goes. This is not a permanent solution and as such is not designed to look permanent – the permanent solution will be a greater piece of work and we cannot expect funding for that at present.

Temporary support work has been undertaken in the south tunnel but none in the north tunnel as the condition there is so poor that installing it safely would be way outside the budget and would require the temporary works that will be required for the repair works. The work that will be undertaken in the south tunnel is relatively straightforward and safety precautions are achievable with relative ease. However, the north tunnel is much more complex due the amount of masonry fall that has already occurred. Our initial plan cannot be worked safely so much more extensive temporary protection will be necessary such that operatives are safe if more than just a few bricks fall; we have to be aware that the actual work of repairing the masonry could cause destabilisation especially where only a 4” skin of brick remains in place. A stone mason and a specialised (tunnelling) temporary works engineer have provided advice on safe means of access for the works. Due to the hibernating bats we are not allowed back into the building until March/April. In the meantime, an advert will be placed in the local paper in the next two weeks for expressions of interest in connection with the remedial works. Following receipt of the expressions of interest the project will go out for competitive tender in mid-January with a view to starting work in April – as soon as the bats have finished hibernating. I hope that this is of use for you to share with your colleagues in the Working Group”. 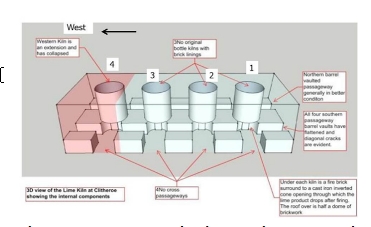 Since this report was submitted the intended programme of works on site , due to commence in March/April had to be suspended as a result of Coronavirus and event after the relaxation of the National ‘Lockdown’ the restrictions due to the presence of Bats prevents any site work commencing until Autumn 2020. WE are advised that this stand down time has been used to review various aspects of the project including the initial tenders received for urgent repair works, options for arresting water ingress into the top of the kilns and the implications of improvements to surrounding drainage systems immediately adjacent to the kilns undertaken by Network Rail on the Blackburn – Hellifield Line.

Jane Entwistle will be speaking to the Society and any interested visitors about the project at our May 3rd Meting 2021.

Initial research that was undertaken into the condition of the kilns

Historic England’s Civil and Structural Engineering Team visited in February 2015. Some areas of the kilns had already suffered from - or were at imminent risk of - localised collapse. Vertical cracks on most elevations and a widespread need for pointing was noted. Particular concern was noted for the vaults at the base of the kilns and tunnels. Propping was recommended to prevent further collapse. An inspection from above was recommended to inform the level of intervention necessary to stabilise the kilns. Historic England provided grant-aid for a full structural survey, produced by Anthony Curtin of Curtins in October 2015. The structural report outlines emergency repairs urgently necessary within 2 years. The findings corroborate the inspection report produced by Historic England’s Structural Engineer in February 2015, and that propping is a priority. Kiln 1 has collapsed. Brick facings have been lost from the passageways. There are open joints in the walls, and vegetation/roots, as well as tapering/tearing cracks. Concern was noted with saturation to the top of the kilns. Water would have been driven off while the kilns were in operation, but is now permeating the structure. The cost of urgent repairs was estimated at £79,500, excluding design fees, contractor preliminaries (15%), local authority charges and VAT.

Historic England’s Research team produced an Assessment of Significance in April 2016 to understand the rarity of Bellmanpark Lime Kilns in a national context. The research found that, as well as being nationally important as a Scheduled Monument, Bellmanpark Lime Kilns are a rare survival of kilns where quicklime was loaded directly into rail wagons in tunnels beneath the kilns.  Only 4 other examples are ever thought to have existed in England: only 2 of these survive.

Historic England’s Geospatial Imaging Team undertook laser scans of the kilns in December 2015 and June 2016 to understand on-going movement. The Monitoring Report identified an increase in size of cracks in the NE, SE and SW elevation of a few millimetres. Analysis of movement in the NW elevation was inconclusive due to the presence of vegetation, which affected comparison of all elevations to an extent. Historic England’s Senior Structural Engineer assessed that movement rate is not critical at this stage, given the size of the crack as a whole. However, he notes that this does not detract from the need to address urgent repairs.

A PhD student at University of Nottingham’s Geospatial Institute used Bellmanpark as a case study to test a new methodology for structural condition monitoring using terrestrial laser scanning and generalised procrustes analysis. The PhD is still in production.

Historic England’s Quantity Surveyor produced cost estimates following discussion with Anthony Curtin. The two agreed the measures outlined in the Quantity Surveyor’s Cost Estimates spreadsheet, but recommend that the final schedule should be determined following investigation by the Structural Engineer (or lead professional) appointed to carry out repairs. This relates in particular to whether temporary roofing or waterproofing of kiln tops is the preferred means of protecting the kilns.

The Quantity Surveyor noted that there are various combinations of repairs which could reduce or remove the necessity for some of the temporary works but would need a careful Value Engineering exercise. The QS’s estimated total for all urgent repairs including temporary roof is £187,889 excluding VAT

Historic England North West has a strategic focus on tackling industrial heritage at risk. Emergency repairs to Bellmanpark Lime Kilns would fit in to this objective.

Historic England’s Repair Grants for Heritage at Risk scheme offers grants based on financial need demonstrated. All Historic England grants require a match funding contribution (which could include additional grant aid from other sources).

Historic England’s Repair Grants for Heritage at Risk are often in two-stages. Project development stages can cover further investigation, preparation of schedules of urgent works and clarification of costs; repair phases cover repair works. After the development phase, Historic England agrees with applicants the most appropriate schedule of works. Our grant offers usually comprise a firm offer for project development and an in-principle offer for repairs.

Tamsin Cooke, Heritage at Risk Projects Officer at Historic England, could provide advice and support on preparing a grant application.

Historic England can help with publicity/communications to highlight Hanson’s contribution to community history and heritage through contributing to emergency repairs.

Hanson expressed that they would in theory be happy to have open days to allow the public to see the kilns in a safe environment. These could happen up to 6 times a year. Public access is usually a requirement of Historic England Repair Grants.

The lime kilns could theoretically be transferred to a properly constituted Friends Group on a long lease, while Hanson retained ownership. This would allow the Friends Group to apply for further grant aid.