Record of Inquiry from Morgan Browning, Ogden, Utah, USA regarding  her ancestor

My great-great grandmother Ann Emmett was from Clitheroe and emigrated to the US in 1855.  According to the 1841 and 1851 census records, she was living with her family on Old Hall St. Can you recommend any local historians who can tell me if this street still exists?  I've looked on a number of maps and I found a Hall St. lined with very modest homes that I assume were for the mill workers and we know she and a number of her family members worked in the textile mills.  I am planning a trip to Clitheroe with a cousin and needless to say, we would love to see where she lived.

Hi Morgan,
I’m Shirley, archivist for Clitheroe Civic Society. I deal more with the people and local newspaper than with streets etc. but I can tell you that Old Hall was on the right of this photo of Strang Stee ( that’s spelt right – it’s not Strang Street !!) I’ve attached a photo and map of its position in town. One of the oldest streets in town, John Lambert will be able to tell us a lot more about that - I shall see him on Monday next unless you get a direct reply from him before then.

I suspect that your g.g. grandmother was baptised 16 Feb 1823 at St. Leonard, Downham – daughter of John and Sarah – abode Downham. Father a weaver. 20-Oct 1821 at St. Leonard, Downham - John Emmett of that chapelry married Sarah Boothman ( who signed with an X ) also of that chapelry. Witnesses were William Mercer and Hugh Granger. I suspect the Sarah Boothman was the daughter of Roger and Ann Boothman of Colne Hall . He was also a weaver, and this occurred on 6 July 1794 at St. Bartholomew, Colne . (This last is my supposition only and ties in with Ann being named after her grandmother !! I hope it fits in with your research ?? )

Hopefully John will be able to provide more information on the Old Hall for you, 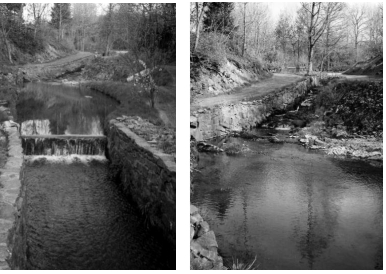 Just to say thank you for your reply and to assure you that ...yes!! ... we have lots of pubs in Clitheroe – the real ale ones being especially worth visiting. In fact, John, our local historian, has just published a book on - “ The inns of Clitheroe Past and Present “ You must see a copy when you come. I cannot find a baptism for your gt. gt. grandmother, Ann, and I wonder if she was baptised straight into the Mormon faith because the Mormon missionaries were in the Downham / Chatburn area as early as the 1830’s. I attach photos of the Mormon baptismal pool in Chatburn. I believe that the actual pool is the one formed between the front waterfall and the natural one at the back. One can still visit it although I believe that the level of water has not been as full in the recent past.

Hi Morgan
I have just seen your email to Steve and after a quick check I have found a John Emmott listed as living in Old Hall Brow Lane on the Tithe Map of 1842 - 47. Unfortunately, the lane does not exist anymore, but it was a branch off Old Hall Brow, (Strang Stee) about half way down, between Moor Lane and Lowergate. If I can find your Ann or any other Emmett’s I will let you know.

Thank you so much for your speedy reply! I know that you all must receive numerous queries and I'm so grateful for the information she provided! I am absolutely blown away! As for Ann, she, along with her two sisters and a brother joined the LDS church and eventually ended up in Utah. In fact, she and her sister, along the sister's family were part of a famous handcart company that trekked 1300 miles from Iowa to Utah in 1856. All four siblings ended up in Ogden, Utah where Ann became the third plural wife of a noted gunsmith and part of the larger Browning Arms Company family.

I'm not Mormon and terrified of guns but I'm fascinated by the history largely because my branch of the family is so far removed from that culture. Three of her sons were mayors of Ogden and the family maintains a large presence in Utah today. BTW, the Emmett siblings were very attached to their hometown and Ann was known for reciting the poem "Old Clitheroe" at family gatherings. She died in 1918 and it's estimated there are over a thousand descendants. I've attached an image of her surrounded by her family that was taken in 1907. Again, I am so grateful for the assistance and can't thank you enough. I'm planning a trip with a cousin (hopefully later this year) so we can take in the sites and visit a few pubs along the way! 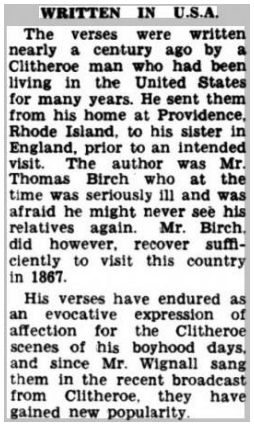 Hi Morgan
I am so glad that we have been able to be of assistance with your research. If you have no objections I would like to upload this exchange along with the fascinating images that you have provided, onto our Website (www.clitheorcivicsociety.org.uk ) within the ‘Shirley’s Snippets’ page. However, before I give these instruction, I do need your permission to do so and will not use the information without it. As and when you do make the trip back to the UK and Clitheroe, please do make contact if you have the time. It would be good for one or two of our members to meet up and take you and your a cousin on a tour of the town (http://clitheroecivicsociety.org.uk/activities-menu/clitheroe-town-trail-2.html ) . It would round this exchange off nicely. We could, as you suggest, also take in one or two of the pubs which remain here. John Lambert, who I think will also be in touch with you shortly if he hasn’t done so already, has just self-published a book on just this subject ‘Inns of Clitheroe past & Present’ so there is no shortage of information – and active interest - on this subject within our Society!

Ann Emmett was born in Downham, near Clitherore, Lancashire, England on April 23 1830, the daughter of John Emmett and Sarah Barthan. She attended school but a short time, but it was very easy for her to learn. When she was nine years of age the family moved to Clitheroe where her mother and older sisters joined the Church of Jesus Christ of latter Day Saints. Her father was very bitterly opposed to the church so Ann was not baptized until Dec.1, 1847 by Henry B. Jacobs. At the age of ten she went to the factory to work for one year; then she quit to do housework. She was twelve when she again went to the factory where she worked for thirteen years.

In the year of 1850 the older children left home; Mary Ann, Mattie and Thomas going to America. Another sister was married and Ann was left home alone with her parents. Six months after her mother died, Ann left for America in the ship, “Signs of Shore”. They were on the water between five and six weeks. After arriving in New York, she went straight to St. Louis where she stayed for a year with her sister Mary Ann and her husband John Ellis. Her sisters Martha and Harriet and her brother Thomas had immigrated to Utah a year or so before.

In the summer of 1856, the Ellises and Ann prepared to come to Utah. They joined the McArthur Handcart Company. This was the second handcart company to start across the plains; the first one starting about a week before. Ann waded every stream between the Missouri River and Salt Lake except the Green River, and helped pull a handcart all the way. The fact that a person would be willing to start to walk half way across the continent shows a very strong character and will power. The trials and troubles that those people went through are so well known by all that it is needless to mention them.

The Ellises and Ann arrived in Ogden in the fall of 1856. It was not a particularly cheerful reunion. The winter of 1855 was known as the Hard Winter, and Ann’s sisters and their Families had suffered a great deal. In 1857 she married Jonathan Browning. He had arrived in Ogden in 1852 and had very soon became a man of importance, taking a very active part in many civic and business affairs. He was well known throughout the country for his ability as a gunsmith. Ann was his third wife. They had seven children, but two of them died in infancy. Ann Browning, as a mother, believed in the adage “Spare the rod and spoil the child”. She and her husband made a special effort to always keep their children busy. Their method of rearing children proved to be successful, as all their children grew to be respected citizens. One son, Samuel, was mayor of the city; William was postmaster; and George was made President of Weber Stake. Jonathan Edmund Browning established a national reputation as builder of all the gun models of his renown brother, John Moses Browning. The two were inseparable as a creative team in gun design.